To each his own we are resigned

We come together neural

Our life to death allured.

With “goodness” everywhere though small,

To all we measure out submission,

There is no good in falsity,

Twisting truth is evil’s how.

Cut it up, reverse, then bow.

We best harken to the Lord,

His Word a double-edged sword

Reprove the bad, think on the good,

Or else it’s all misunderstood.

“And have no fellowship with the unfruitful works of darkness, but rather reprove them.” – Ephesians 5:11 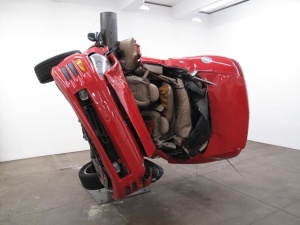 Year’s ago, the totality of my response to viscerally oriented art was a purely dismissive one. The disorientation it produced simply disinterested me. Due to its contrived quality,  I never saw sufficient reason to investigate it more thoroughly. It was also antithetical to my own artistic aspirations, and devoid of the aesthetic import, that I sensed intensely in art.

The force behind much of this art tends to be visceral, effecting the senses. Its intensity of affect is comparable to lighting birthday candles with a blowtorch. The shock serves as a powerful distraction which allows the meaning of the work to enter the viewer in a deeper fashion, and with less resistance. Through involuntarily enlisting the subconscious process of the mind, this mechanism is reminiscent of trauma based systems.

This mechanism should be clearly differentiated from classical objective art appreciation as one of aesthetic judgment. It should give pause, and raise serious questions with regard to what hidden, incomplete, occult potentialities may be present in such art or art experiences. The affect that ensues, becomes one of psychic mental disturbance, presented through forms of shock, moral perversion, and physical disgust. The mechanism for judgement amidst such work could be compared to rating accidents during a day at the races, as best illustrated by Dirk Skreber’s “Crash”.

Chris Ofili’s “The Holy Virgin Mary” represents another form of gratuity where the shock, or offense is considerably subdued.  A highly stylized black female figure on a radiant background encrusted with glitter and elephant dung, while miniature angelic forms constructed from pornographic magazines dance in the space around her. Although the widely publicized controversy, that took place amidst the Brooklyn Museum Show, centered upon Ofili’s piece, it was no where to be seen within the media frenzy. Apparently, the idea of combining the Virgin Mary, pornography, and dung could only be lessened through viewing the insipid aesthetic and attractiveness of the actual piece. Serrano’s “Piss Christ”, being a photograph, presented a lesser, but similar impediment, leaving its description, rather than its form, the primary vehicle for outrage. These type works offer themselves willing sacrifices to media dialectics that serve established collectivist agendas. The artists themselves may, or may not be fully aware of such potentialities.

Nowadays, the average person pays little, if any, attention to contemporary art, and displays no real curiosity, or reliance upon the fine arts. Art has indeed become more elitist while, at the same time, becoming less artistic. Popular culture offers increasing artistic experiences through passive forms of  movies, television, and gaming that speak directly to the subconscious.

The only high art the general population is likely to become aware of is the controversial art depicted here. The non-hierarchical aesthetic paradigm promoted over many decades has destroyed the ability of the general public to develop taste, narrowed their vision, earned their ignorance, and increased their cynicism. Resultantly, the only art people can collectively discuss anymore is art that embodies disgust or some other controversy.

Eighties pluralism had no time or need to develop true connoisseurship. Postmodern doctrine provided justification for any oversights of value and taste. Galleries would then offer artworks as the church did indulgences. The traditional connoisseur’s acquired sensibilities attracted to greatness, were co-opted by new money without value, to purchase objects as void of transcendence, as the money traded for them. The market drove the movement like never before, creating ready-made art stars, as quickly as Duchamp’s ready-made sculptures. As Darby Bannard, Professor of Art, at The University of Miami has remarked, with an estimated one-hundred thousand artists working in New York City alone, making just ten pictures a year, the resulting one million works of art present more of a disposal problem than anything else. 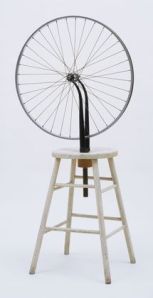 Above, Damien Hirst’s “Virgin Mother and Child” installed near MOMA

In the mid 1980’s, I can remember becoming disheartened at the state of the art world, that the best new art was often ignored or gilded to fill an ever broadening stable of styles. Highly competent artists of the previous generation were being marginalized. Their commitment to excellence was anathema to a postmodern agenda. Their promotion would retract the blossoming art market, which was busy christening pluralism. It would be aimed at de-constructing art by elevating inventiveness above beauty, radiance, and transcendence. Now, any one within the postmodern paradigm daring to use terms of qualitative discernment or objective criticism is considered persona non grata, and diagnosed as unprogressive and antique. Artists pursuant of innovation aiming at excellence, within a transcendent paradigm, work in isolation, outside the establishment, producing work generally unintelligible to the average man, and shunned by postmodernism’s gatekeepers.

Below, Danien Hirst’s “The Pierce heart of Jesus” consisting of a calf’s heart pierced with various surgical instruments, floating in formaldehyde 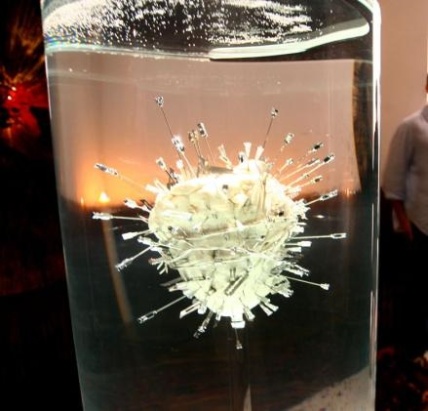 Serious aesthetic criticism has become increasingly esoteric, producing critical exposes of unintelligibility and disturbing subjectivity. The truly liberating force of art, with its seemingly limitless room for experiment would be redefined as an anything goes attitude, fatally confusing the ends of art with its means. Mature artists working with focused determination in narrow styles for years, striving for breakthroughs, were upstaged by a tsunami of mediocrity that would be welcomed en mass. Different became better and better became not different enough.

Anselm Keifer’s lead shed of photographs of himself giving the Nazi salute.

Once the postmodern axe had taken art apart by obsolescing beauty and transcendence, it went to work on thought and emotion, particularly those of the individual. Is it any wonder that much of this new art comes entombed in its own container. If art has died its appropriate that it should be buried. Are we watching the slow motion suicide of western culture? Has culture developed itself into a corner, or a coroner of improbability? Has the true innovative spirit of art itself been co-opted and re-conceptualized into a denial of its own existence? How were museums and galleries transformed into these elitist funhouses and shops of horrors, with forms of imagery more appropriate to carnival midways, witch’s lairs, sex shops, or crime scenes?

Is this art merely challenging the status quo? Is it substituting historical references for the historicity of art? Art has always re-invented itself with the help of artists willing to wrestle with its aesthetic demands. In what way does this art embody struggle or experience? Do these works inspire? Do they point forward? Do they suggest possibilities or preclude imitation? Does this art desensitize our response to disgust and abhorrence? Are these works breaking down other cultural realities besides art itself? What social agendas are promoted by presenting incendiary controversies through false dialectics? Do these art forms better resemble, and function as recondite icons and idols, than objects de arte? Is the God of the bible being de-mystified, de-glorified, and replaced by man’s image?  What awaits a culture that uses a gift, such as art, to rise above his creator, and present himself as god? Even art itself is not sticking around for the ride. Will man sacrifice art on the altar of his own deification?

Below, Anselm Keifer’s “The Shekinnah” (glory of God) complete with kaballah’s “Tree of Life” and glass shard-pierced bride in absentia. 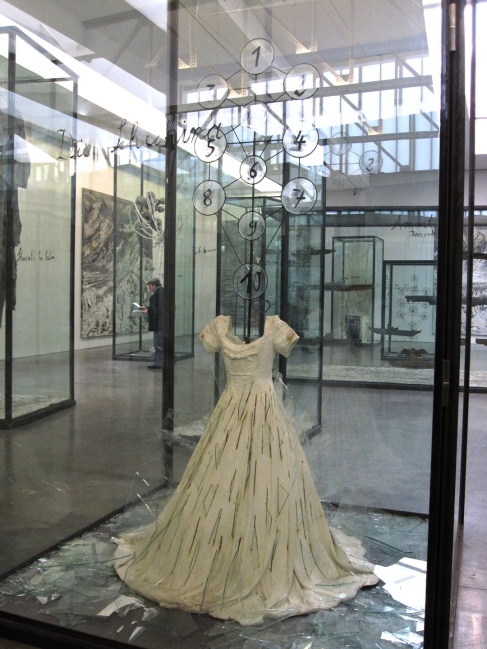 Pragmatically, fame and fortune hang heavy in the balance for the ego, and as the bar lowers the crowd gathers. I am not suggesting that this art be censored in any way. Neither do I suggest that these artists are fully conscious of the historical ramifications of their intentions as I see them. I do recommend, however, that after viewing their art honestly, and critically, one should, follow God’s direction to Lot, at the destruction of Sodom and Gomorrah, and not look back.

One wonders, amidst our post-modern age, exactly what mechanism allowed idol worship to hold such a diverse populace fixated with such singularity in ancient times? Is there a comparison to be made between the imagery of those days and our present, highly visual, culture? Were the ancients as transfixed to their actual gods of wood and stone by ritual, as we are to our virtual gods of reality by habit? Have we been transfixed by choice or default? Might the electronic media that permeates our lives be better termed ritual reality and if so could the ritual reality itself be instrumental in deceiving us, demanding our sacrifice, and providing a delusion of mythic proportion? 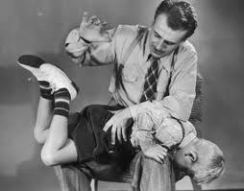 Bend over believer you need a good licking,

Pluralism’s paddle must regulate your ticking.

Plural though we be, we do the best we can.

We’re ready to accuse you, not unlike your god.

Ever more abuse you, without you sensing fraud.

We’re your adversary, the spirit you should wrestle,

With open arms we lure you, into our chest you nestle,

Though it backward seems, show us this submission,

Cunningly convinced, we seek your de-commission.

Focus on our goodness, we’ll spank yours out of you,

We’ll un-sanctify you, the least that we can do.

You require correction, and strangely that’s our mission,